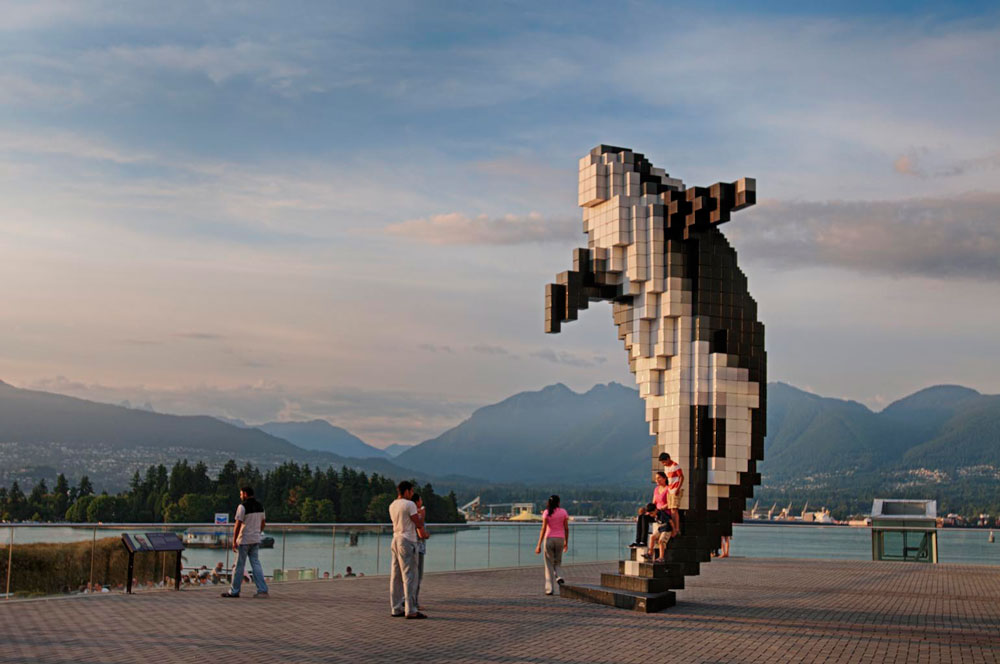 Equidistant between Asia and Europe, Vancouver is the meeting place of the world, and a unique fusion of these hemispheres. Downtown Vancouver embodies this in its design, culture, amenities, and housing and employment options. But what will downtown Vancouver look like in twenty-five years? In summer 2015, we asked nearly 11,000 people who live, work, and visit downtown Vancouver to share their visions for 2040.

Downtown Vancouver in 2040 is the place where it all comes together: a concentration of ideas, activities, entertainment, work, and connectivity to the wider world. In 2040, downtown Vancouver is a global go-to destination, a petri dish of urban activity, intensified – like all great cities – through the agencies of proximity, diversity and provisionality. Whether you visit or live in Vancouver, you can’t avoid downtown. It is the essential, un-replicable, Vancouver experience.

Vancouver builds on the singular success it had in populating downtown over the past twenty five years: something that put the city at the forefront of successful urbanism across North America. Downtown in 2040 also builds on what Vancouver has already achieved and its residents cherish. It’s a more intense version of Vancouver in 2015. Urban activity is intensified.

People who live and work in downtown Vancouver enjoy good health and well-being. It offers an active lifestyle, with amenities that encourage walking, cycling, and sporting activities. Everyone enjoys unrestricted access to the surrounding waterfront and views out to the city’s spectacular natural setting. Nature is welcomed into the city.

Downtown’s varied neighbourhoods (such as the West End, Yaletown, Downtown South) are carefully planned and designed to work at a human scale. Residents know their neighbours’ names. Those who want to live downtown have access to a range of housing options.
People live here throughout the various stages of their lives, from children to the elderly, and all feel like they belong. Downtown enables its residents to age in place. And, the community’s diversity is notable too: young and old, wealthy and poor, new immigrants and native born: all find a place downtown.

And, the city responds: it’s all about building and shaping a downtown of spaces designed for people to come together.

While it’s spectacular geography remains a defining characteristic, in 2040 downtown Vancouver manifests a seamless melding of sublime nature and vibrant urbanism. This is a great city, not just a great natural setting.

This sense of integration is evident on multiple levels: natural and urban, history and contemporary culture, east and west, vitality and safety, local and global. These dualities give downtown Vancouver its authentically unique sense of place.

Iconic architecture defines the urban skyline, while historic buildings are cherished and
re-purposed with new life. Downtown Vancouver’s urban history is a jumping off point for its future. Here the future speaks to the past.

Downtown is full of public spaces, at every scale. From tiny pocket parks and animated alleys to major urban squares at the heart of the city, downtown Vancouver invites – even insists on – active public engagement. It is this theatre of urban life that makes the city irresistible to visitors and residents alike.

Moving around downtown is easy, safe and comfortable: a city made human by its sustained emphasis on the pedestrian. Most people choose to get about on foot, given the investment in the public realm: wide sidewalks lined with trees, elegant street furniture and public art, great lighting, safe crosswalks, pedestrianized lanes lined with intriguing shops, restaurants and cafes. Sidewalk patios that spread into the street and offer an abundance of choices to stop and meet a friend, have a drink or meal, watch the passing parade.

Public transit is ubiquitous too, and frequent. People hop on and off the free-fare buses that loop around the downtown peninsula, linking the West End, Central Business District, Yaletown and Gastown. Getting into and out of downtown is easy, with the SkyTrain, Canada Line, enhanced West Coast Express rail services all day, and fast ferries across to numerous points along the North Shore and beyond. People commute to downtown by ferry from as far away as Bowen Island, Sechelt, Nanaimo.

Arriving downtown by water is a spectacular experience, up there with the best of waterfront gateways around the world: A multi-modal waterfront transportation hub welcomes people to this city in which all roads, paths and routes lead you to the water’s edge. And once there, the continuous waterfront walkway/bikeway encircles the entire downtown peninsula and links you to the rest of the city, building on the decades of investment that Vancouver has made in its public waterfront. Here at the foot of the beating city centre, the salt air and seagull’s cry permeate your senses.

The bridges that link the downtown peninsula to the surrounding city have been transformed into multi-modal connectors, with safe, generous walking and cycling routes side by side with vehicle lanes and dedicated transit lanes. The viaducts have been replaced; Georgia Street extends down to the False Creek waterfront. And, another link has been added: a graceful arch of suspended steel spans the entrance to False Creek and links the West End to Kitsilano Point, providing a new way for pedestrians and cyclists to move about the city.

Downtown’s sense of place is also reflected in its embrace of the arts and culture: here worldrenowned cultural institutions are nurtured by home-grown artists, and the City’s policies anticipate, enable and facilitate artistic creation, not stifle it in red tape. The City is in the business of saying yes, to every kind of creative act, from the intensely local to the global. As it has for decades, downtown still hosts many film shoots, only in 2040 it’s much more likely to be a movie set in Vancouver, and not a stand-in for elsewhere.

The people making those films, and the many others creating cultural activities and artistic productions that pop up all over downtown, help drive the ever-expanding range of eating, drinking, entertainment, shopping and accommodation options that energize downtown Vancouver as the region’s preeminent destination for visitors and residents alike. People continue to enjoy access to the surrounding natural setting. If anything, Vancouver has become even more of a ‘City in Nature’, even as the mix of land uses downtown is intensified.

As ever-changing technology continues to reinvent the workplace and job market, the hum of business transactions and commerce downtown is 24/7. In 2040, people work in everexpanding new ways: remotely, in shared cooperative spaces, at home, in custom-designed office complexes, on the go, indoors and out.

Downtown in 2040 also offers an entrepreneurship incubator hub, in partnership with the local universities, whose presence downtown has been strengthened and made more visible. Downtown also facilitates a strong, integrated local food system – from ‘farm to table’, with multiple opportunities for food growing, processing, retailing and distribution, and food consumption.

In 2040 the establishment of a vibrant ‘sharing economy’ downtown goes beyond just residents and encourages businesses to investigate shared libraries, shared workspaces, shared resources and pooled services. Downtown has become a hub of business networks, optimizing the diversity and propinquity of businesses.

Almost everyone can afford to work, shop and live downtown: a wide range of goods, services, jobs and housing choices appeals to the full socio-economic spectrum, from informal street vending to multinational corporate head offices, and a host of work modalities in between. Equity is valued and practised: Downtown Vancouver is not just for the very rich, or the very poor. It is for everyone.

The ideas generated through Re-Imagine Downtown Vancouver reflect a desire for an innovative and holistic approach to the evolution of downtown Vancouver. We don’t own these ideas; they belong to the people that dreamed them.

Achieving this collective vision will require a collaborative approach between the Downtown Vancouver BIA, its members, the City of Vancouver, and other partner organizations. It will need visionary leaders within our community to steer the development of ideas that resonate for them. We look forward to working together to embrace this vision and make the ideas listed in this report a reality. Because, if we don’t determine how downtown Vancouver grows up, others will determine it for us.