Whereas other award recipients have established histories, successes and legacies of enhancing downtown, they wanted to shine a light on the up-and-comers. These are current leaders in their sector or industry who are spreading their wings. Young leaders who are already changing our downtown for the better. They’re making us think of our city and our downtown in fresh and interesting ways. In other words, they are helping us Re-Imagine Downtown Vancouver!

The inaugural Emerging Leader Award was presented to Vancity Buzz, produced by Buzz Connected Media. Vancity Buzz came to inception in the Vancouver blogosphere in the summer of 2008. It was groundbreaking for its timely, cool, interesting and quirky online content. It quickly replaced—or supplemented—mainstream media as a ‘go to’ source of news; in particular, around politics, events and inside City Hall happenings. Since then, it has grown exponentially with increased content, solid business relationships, strong social media presence, and expanded readership.

Vancity Buzz draws more than four million website visitors a month, and has earned nearly 100,000 Twitter followers through its coverage of news, lifestyle and entertainment. With a finger on the pulse of new retail and commercial changes impacting downtown, Vancity Buzz focuses on the culture and people that make our city unique. It’s achieved success by highlighting the greatness in Vancouver: local events, entertainment, news, and talented Vancouverites. 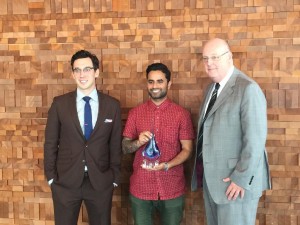 Increasingly, it’s become a ‘must-have’ marketing sponsor and partner for festivals, concerts and events. And, a go-to source for content such as the five must-try food truck sandwiches or the ten best summer patios. Its latest venture is being the instigating force behind the creation of the New Year’s Eve Society and the current movement to host a new, free, outdoor New Year’s Eve event in downtown Vancouver this December 31st.

For the past seven years, our team has been dedicated to highlighting the amazing people, organizations and communities that are doing great things in Vancouver. A young city needs people to take it to the next level, and help truly elevate it on the world stage. We want to not only talk about Vancouver, but also drive its discussions and initiatives.

Congrats to Vancity Buzz co-founders Karm Sumal and Manny Bahia, as well as the rest of the Vancity Buzz team!