Originally published on Voices in the Square on August 31, 2015. 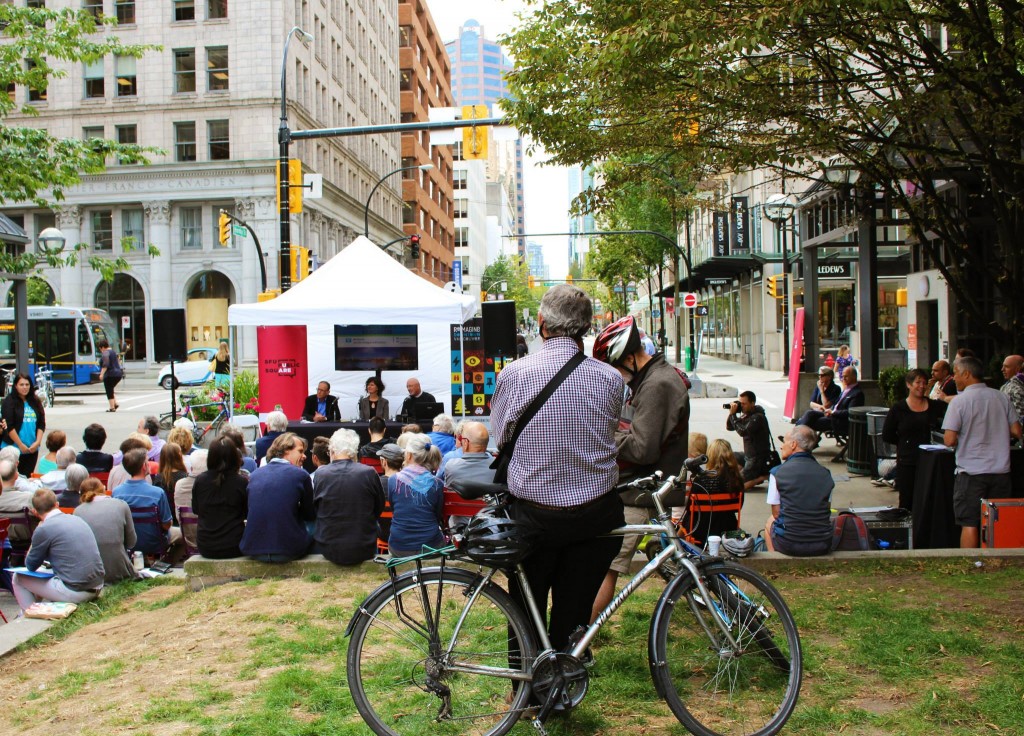 The August 20th City Conversations took place at Lot 19 and focused on re-imagining downtown Vancouver in the next 25 years.

The director of City Conversations Michael Alexander opened the August 20th dialogue with the reminder that this was not a lecture but rather a conversation and that there is no audience, only participants. This conversation focused on the Re-Imagine Downtown Vancouver engagement project, a joint venture between the Downtown Vancouver Business Improvement Association and Simon Fraser University Public Square, focusing on the development of downtown Vancouver over the next 25 years.

Lance Berelowitz, the founding principal of Urban Forum Associates, opened the conversation speaking from his perspective as an urban planner focusing on the physical fabric of downtown in the year 2040. Berelowitz envisioned single use residential towers becoming obsolete, replaced by inclusive mixed use buildings composed of residential, work, and commercial use. This transitioned into the call to rethink and repurpose large underused space downtown such as parkades and sidewalks.

Berelowitz continued on his vision with the transformation of our urban waterfront. Using the example of Toronto, he imagined that our railway will be built over or moved. With this would come the expansion of an urban ferry network that could include stops within North and West Vancouver, Coquitlam, Port Moody and perhaps even Bowen Island and the Sunshine Coast.

Keltie Craig, a social planner responsible for implementing the City of Vancouver’s Healthy City Strategy, imagined her 2040 downtown to be a more equitable and accessible place for all. While she praised Vancouver for being a healthy city, she reminded us that it currently was not a healthy city for all. Many in downtown Vancouver are isolated, face discrimination and exclusion, and have difficulty accessing services. 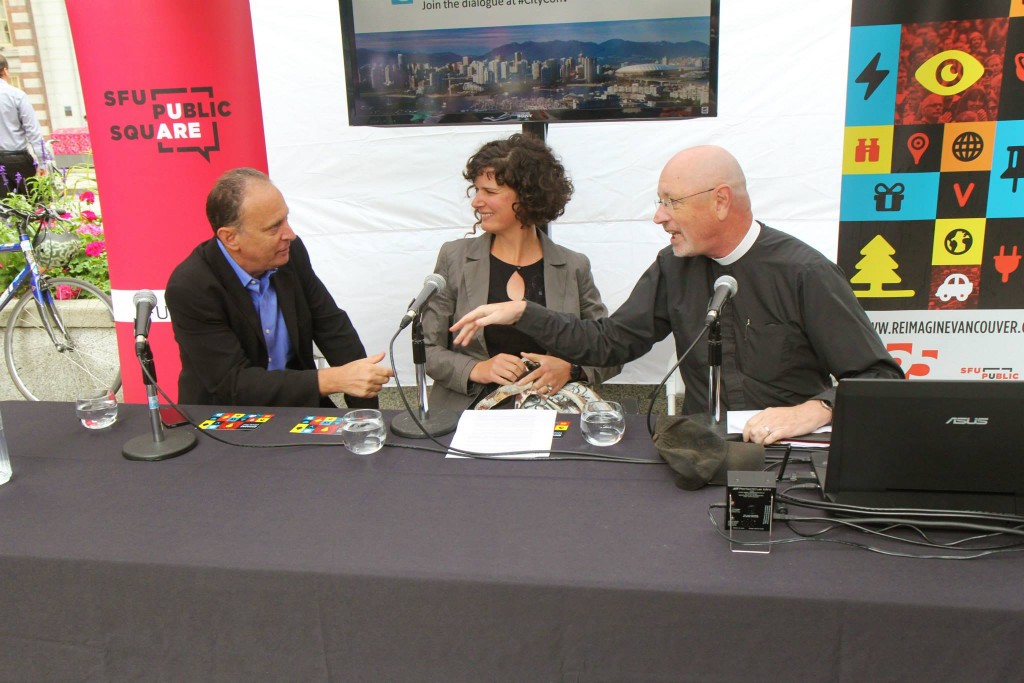 Craig visualizes downtown Vancouver in 2040 to be a healthier more equitable place. Her future downtown is connected and engaged, with working and housing options, and a nourishing food system. Children will have a strong start in life as her vision is full of safe high quality $10 a day childcare centres. She finished her presentation with the powerful reminder that “the vision of a social, environment, economic sustainable future for downtown will not happen unless people take action to make change.”

The Very Reverend Peter Elliott, rector of the 126 year old Christ Church Cathedral in downtown Vancouver focused his vision on downtown’s past as a way of developing its future.  Elliott acknowledges that while the downtown of today is very different from the downtown of 1890, some needs are the same. He reminded participants that churches act as community gathering centres providing downtown with places to commemorate, celebrate and mourn life together.

Using his personal experience during the 2013 Walk for Reconciliation and seeing the role that Christ Church Cathedral played, Elliott stated that downtown Vancouver cannot just be for commerce and consumerism —there was also a need for art, beauty, community and friendship. Focusing on the underrepresented sense of sound when planning for the future, Elliot imagined the completion of Christ Church Cathedral bell spiral on corner of Burrard and West Georgia, with the hope that the bell will call the people of downtown together to celebrate festivals of all traditions, religions, and cultures. 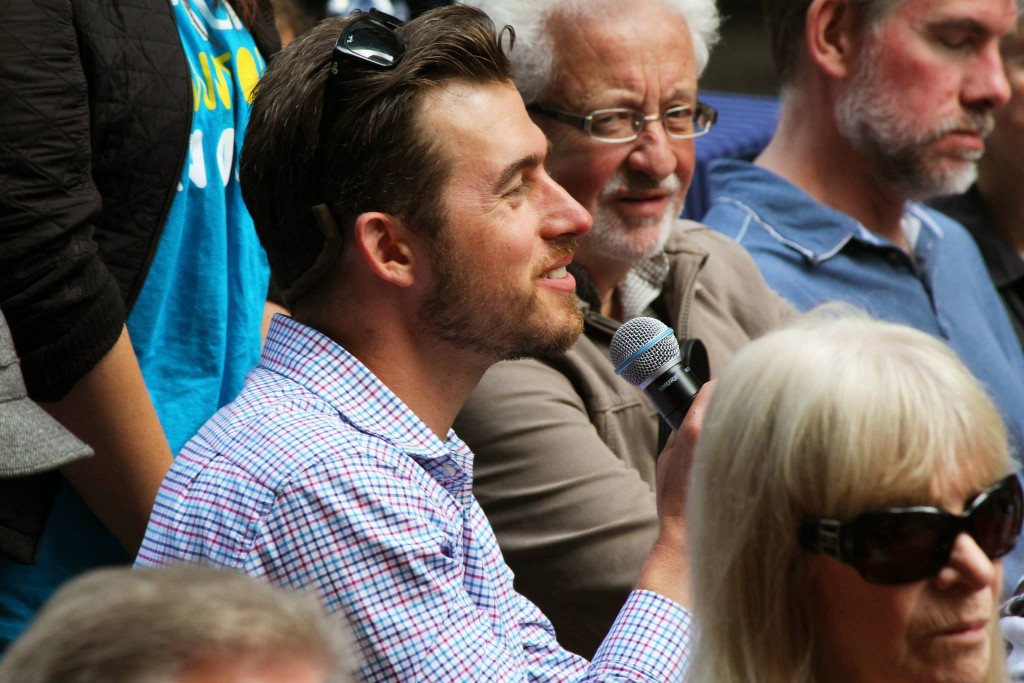 An audience participant asks a question.

The conversation was then opened up to all participants who wanted to share their observations and questions. Some of the themes raised included: concern for costs of social activities downtown, urban development and sunshine, how to tackle social isolation, car-free zones, and good quality urban public spaces. A recurring issue was housing with a focus on intergenerational relationships. This sparked ideas on implementing diverse housing forms including tenure ship and co-sharing.

Brian Tucker a member of Senior’s Advisory Committee to Vancouver City Hall, spoke to the panel stating “all our reimaging involves social cultural change, but what is your suggestions for a strategy to start social change in Downtown Vancouver?”

Keltie Craig responded with the solution of change at the individual level. She called upon the participants to challenge ourselves, to greet strangers and to change the social norms of friendliness. “I don’t think there is an easy answer for social connection…but it starts with saying hello and smiling at strangers.” 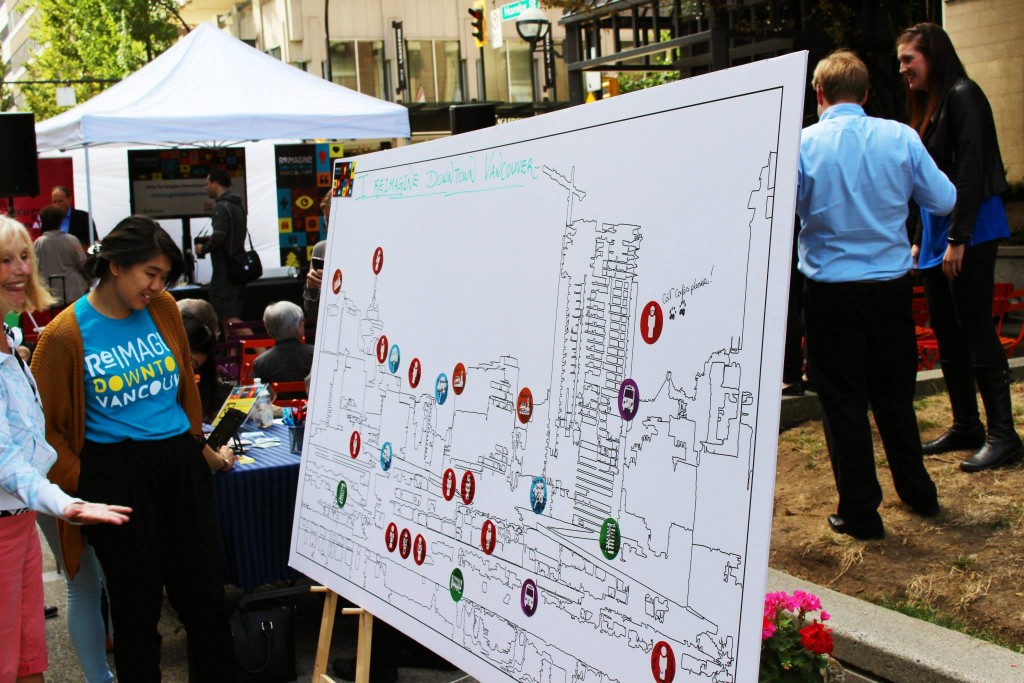 Participants had the opportunity to share their ideas for downtown Vancouver on the #rdtvan idea board.

Sarah Beley is a recent graduate of Simon Fraser University and an Alumni of the Semester in Dialogue.